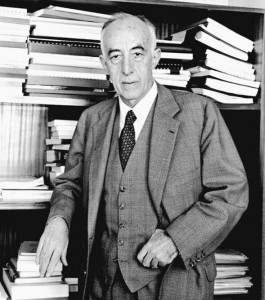 Nicolás Cabrera was an outstanding scientist who strongly influenced the development of Physics in Spain in the last third of the twentieth century. His personal contributions to science are widely known and cited today. As the current head of the Department of Condensed Matter Physics, in the Universidad Autónoma de Madrid, I will refer briefly to his role in the creation of the Physics Department of our University.
As with many other Spanish scientists, writers and artists, Cabrera was exiled as a consequence of the civil war. Before this, the new physics developed mainly in Europe had also permeated Spanish society. This led talented young people to go abroad to learn in the most prestigious laboratories. One of the most prominent of these was Nicolás’s father, Blas Cabrera, who was then the leading Spanish figure in the growing international activity on physics. He was the head of a modern and well equipped laboratory of physics and chemistry, close to the students’ residence where Dalí, García-Lorca and Buñuel were living then. He made an important experimental contribution to magnetism, and it was on this subject that Nicolás Cabrera performed his first experiments under the supervision of S Velayos.
At that time, scientists such as Santiago Ramón y Cajal, Blas Cabrera and others contributed, through their talent and efforts, to a small `golden age’ of Spanish science. Civil war swept away all this blossoming activity. More than thirty years later, Nicolás often dreamt of emulating his father’s endeavours for the development of science in Spain.
The opportunity came in the 1960s when he accepted the offer of the Spanish Minister of Education, Villar Palasí to set up the Department of Physics of the new Universidad Autónoma de Madrid. In this he encouraged Cabrera to adopt the same criteria of quality and efficiency that he had used as head of a new department in the University of Virginia. For many young people beginning their careers in physics then, myself included, Cabrera was a mythical figure. His return to Spain with the aim of forming a new and modern Department of Physics was very exciting for us, and we wanted to be part of it. His great talent and personal qualities enabled him to quickly assemble an excellent group of young scientists. He was granted autonomy by the authorities to offer positions according to his personal criteria, fulfilled by considering mainly CVs, recommendation letters and interviews.
The early years were extremely exciting due to the friendly and creative atmosphere promoted by Cabrera. Many reputable scientists visited our Department and gave interesting seminars, so valued by Cabrera as to make attendance quasi-compulsory. It is impossible in a short space to give a full account of all the innovations that he introduced in teaching and research; we felt that our department was creative and competitive, and our scientific standards were soon recognized by the international community.
Although Cabrera dedicated much time to organizational work, he made a great effort to continue the investigations on surface physics previously undertaken in Virginia. An ambitious plan was launched, following his arrival to Madrid, to build a machine to perform experiments on atomic-beam scattering by surfaces. That became the most important experimental challenge of this period. Former colleagues on surface physics, such as Vittorio Celli, spent prolonged periods in our department working in Cabrera’s research group. Unfortunately all these exciting activities suffered the suppressions of the University governors and the Ministry of Education during Franco’s last years. Several professors were banned from the university for their political opinions. Others, who came to Spain attracted by Cabrera’s project, had to leave the country due to the hostile atmosphere created by the political authorities. It was very sad for us to realize that such attitudes found support among many representing the Spanish academic establishment.
Cabrera’s work stood out among the extremely low scientific level of most of the university departments and research centres of physics in Spain at that time. Fortunately, this devastating period concluded with Franco’s death, and Cabrera’s projects survived. During this dark time Cabrera thought often of going back to the USA, but he stayed, out of consideration for the young people that he had engaged on his personal challenge. He had the opportunity to see his work bear fruit, and that the steps he had taken became an irreversible turning point in the development of physics in Spain.
S Vieira
Department of Condensed Matter Physics,
Universidad Autónoma de Madrid
Please Share This
Related Posts
Prof. Nicolás Cabrera biography
For those of us who had the pleasure of knowing him in his mature years,…