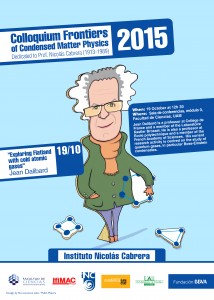 In his famous novel “Flatland” published in 1884, the English writer Edwin Abbott imagined a social life in a two-dimensional world. With a very original use of geometrical notions, E. Abbott produced a unique satire of his own society. Long after Abbott’s visionary allegory, microscopic physics has provided a practical path for the exploration of low-dimensional worlds.

With the realization of quantum wells for example, it has been possible to produce two-dimensional gases of electrons. The properties of these fluids dramatically differ from the standard three-dimensional case, and some of them are still lacking a full understanding.

During the last decade, a novel environment has been developed for the study of low-dimensional phenomena. It consists of cold atomic gases confined in laser traps, which can be shaped in arbitrary forms such as disks or annuli, in which permanent currents can be established. The talk will discuss some aspects of this research and explain how artificial magnetism can be implemented on these gases, raising the possibility to generate topological states of matter analogous to those appearing in Quantum Hall physics